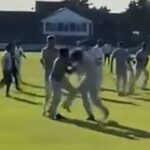 In an incident that shocked the world, a massive fight broke out between some cricketers and a group of bat-yielding thugs during a charity cricket match in the English non-metropolitan county of Kent. The match that is being talked about, was being played at Mote Park Cricket Club in Maidstone on Sunday as a part […]