The Indian pacer Shardul Thakur is known for his bowling ability. But, during the recent One Day International series against England, Thakur impressed everyone with his batting performance. 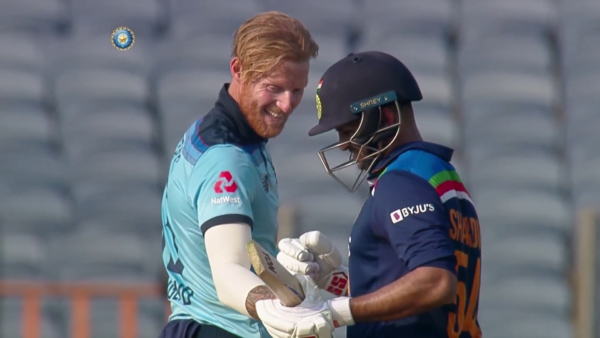 During the 45th over of Ben Stokes, Thakur launched a hug six over the head of the bowler. After watching that shot, Stokes was fully stunned and wanted to check the bat of Thakur in a funny way.

Here is the clip of that video:

Shardul Thakur was totally dominated in that match with his all-rounder performance and took 4 crucial wickets of Dawid Malan, captain Jos Buttler, Liam Livingstone and Adil Rashid, but due to the excellent knock of Sam Curran, failed to grab the player of the match award.

The Indian Cricket Team won that ODI series with a margin of 2-1. Team India easily won the 1st match by 66 runs, but lost the 2nd game by 6 wickets. During the 3rd match, Sam Curran almost took away the game from India with a brilliant inning. But failed to finish the match in the favor of England.